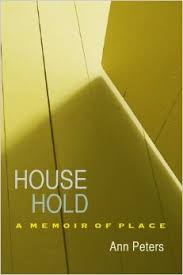 Whew!  What I thought to be a memoir consisting of memories related to places turned out to be so much more in Ann Peters’ House Hold:  A Memoir of Place.  Peters, an English professor, also offers the reader a mini survey course of sorts of literature which pertains to dwellings.

Raised in Wisconsin and eventually finding her way to New York City, Peters describes the architecture of each home as well as the people associated with said residences using insightful rhetoric:

Homesickness, the longing for a familiar landscape, was part of it, and homesickness, of course, has as much to do with what one wanted and didn’t get as it does with the facts of the past.  (12)

I liked the reminiscing, but still I was surprised by it. . . . It occurred to me that the requirements for authenticity had changed, no longer defined by staying put, but by a hunger for shared memory. . . . Of course , lots of people were still around who could talk to Betty about those early days, but it was as if my memories seemed more pure because they had not been altered by the new taverns or been crowded out by all the new people who had since moved out to the ledge.  In leaving I’d frozen the Holy Land in time.  (81)

Besides her deep analysis, Peters presents the players in her memoir with uncanny description:

In obvious ways, Kathryn was the more urbane of the two, the one who seemed most like what I imagined city people to be- quick, competitve, fast talking.  She had a flair for satire and for rage.  I see, fuzzily, the Watergate trials blasting from a television and then my grandmother, a lifelong Democrat, cursing from the couch before sending a book hurtling at the screen.  At the bridge table, she bested all the ladies in town, and when she played Scrabble with her grandchildren, she would not be moved by discrepancies in age or education, giggling gleefully when she dropped her x on the triple letter score. (118)

Oooh, how I love that above description of her grandmother.

I usually tell my students that on a second reading of a book, you go back and notice what you are trying to ignore or resist.  Or you identify the places in the text that lull you, the places where you find yourself unthinkingly giving in.  (214)

When discussing Jefferson, the summer/weekend home purchased by Peters and her husband, she tells of the need to tackle the perennial garden and raised vegetable gardens already in place.  Although admiring her mother’s gardening as a child, “. . . [Peters] never paid attention to how she created it. . . . So much excitement at the beginning.  By August, vegetables rotting on the vine” (238).  With a smile, this quote brought to mind my own laziness in terms of gardening especially towards the end of the growing season.

A discussion of House Hold:  A Memoir of Place accompanied with a small tray of cheese and olives as Peters often did with Dee at 113 1/2 West Fifteenth Street would be ideal for that feeling of home.