As mentioned earlier, my youngest is hooked on Brian Selznick novels.  So, I went to the library and picked up Selznick’s The Invention of Hugo Cabret, winner of The Caldecott Medal in 2008.  After she finished reading The Invention of Huge Cabret, she passed it on to me so that we could then watch the movie, Hugo Cabret together. 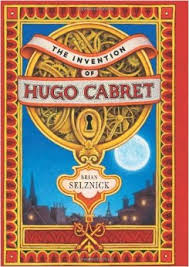 Again, Selznick’s drawings do not disappoint, but help draw me into the story.  What differs in this book than from Wonderstruck is how the drawings follow the plot versus the pictures creating a storyline of their own.

What I appreciate is how Selznick weaves historical truth into his fiction, so I learned a great deal about early films and specifically about Georges Melies and his collection of automata.

More than anything, though, is my joy at how these novels mesmerize my seven-year-old reader.  In fact, tomorrow I am being sent back to the library in order to find more Selznick novels.

Although hesitant at first to watch the movie Hugo Cabret due to a friend saying how scary it was when Hugo turns into a robot (spoiler alert: it was a dream), my seven-year-old and I snuggled and watched with much anticipation.  We enjoyed how the majority of the movie followed the book, but felt bad when we realized Etienne never made an appearance.  Personally, I preferred the overall pace of the movie as compared to the book, but as always, I do believe the book was better.

My youngest squirt was perusing the books in the library the other day when my oldest squirt suggested she read, Brian Selznick’s Wonderstruck.  The oldest’s third grade teacher had read to the class Selznick’s The Invention of Hugo Cabret, and she had thoroughly enjoyed it.  Seeing that his books are novels comprised of words and pictures, I asked how the teacher was able to show a class of 20+ eight and nine-year-olds numerous pictures interspersed with words and maintain control.  She replied, “My teacher used the PolyVision Board.”  Gotta love technology especially when used to enhance literacy . . .

When my youngest cracked open Wonderstruck, great belly laughs could be heard from the backseat on our way home from the library as she watched the wolves approach closer and closer with every turn of the page.

Seeing the novel had heft at over 600 pages, I was concerned it may have been too much for my seven-year-old until I flipped through the pages and saw the plethora of intricate drawings filled with much emotion.  I figured it was worth a try.

That evening I discovered my youngest in her bed, headband light on her head, reading intently, and repeatedly yelling, “Guess what page I’m on now?!”  Needless to say, my oldest squirt hit it out of the ballpark with her recommendation.  The tough part now was asking little sissy to part with Wonderstruck in order to sleep.

Less than a week later, my youngest had finished Wonderstruck and sent me to the library for Selznick’s The Invention of Hugo Cabret.  The pride she exhibited at having read a novel with such girth prompted me to read Wonderstruck, too.  A cross between a picture book, a graphic novel, and historical fiction, I, too, was hooked with those wolves quickly approaching from page one and intrigued by pictures which did not match the storyline being revealed.  Thus, the pictures represent a story in and of itself separate from the written word until the two join towards the end of the novel.  Complex, mysterious, and informative, Selznick has created a new genre of writing, the graphic novel on steroids, which, I think, will engage even the most reluctant readers.