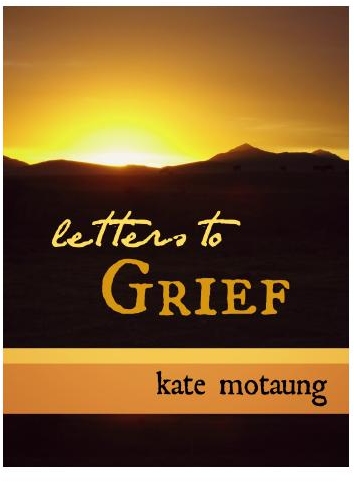 Kate Motaung’s e-book Letters to Grief accurately personifies Grief, with all its uncertain disruptions, through the written mode of letters comprised of poetic language.  Consisting of only nine chapters, Letters to Grief may be brief in words, but limitless in meaning not only for those who mourn due to physical death, but also for those who mourn the living due to separation of any form:  distance, dysfunction, etc.

Beginning with an exploration of the notion of addressing Grief as “Dear,” Motaung quickly argues her position with the use of visual imagery and active verb choices, “You are my rising star, my setting sun, and everything in between.  You dwell with me- in me- but you are not my master.  You roam on a leash, tethered by the One who owns you”  (Motaung 5).

The One here is referring to the “Alpha and Omega” (Motaung 5).  Thus, Motaung, with her ability to empathize with readers at whichever stage of Grief they may be suffering, concludes each correspondence with Biblical references in an effort to promote hope of the inevitable Everlasting which will eventually overcome.

Having lost my father and my breasts at the hands of cancer, I felt a steady stream of silent tears slide down my cheeks as I read, ” . . . [Grief leaves] a unique mark and lasting impression on each person . . .”  (Motaung 19).  Thus, an exemplification of Motaung’s understanding we do not all heal and endure the same.

As stated earlier, my inner English teacher swooned at the careful selection of descriptive prose.  My one metaphorical red mark would be given to the pronoun reference error found in the author’s letter to the reader, ” . . . everyone endures loss in their own, individual way”  (Motaung 3).  Thus, a simple replacement of “his/her” for “their” would be a welcome revision.

Kate Motaung’s Letters to Grief, with an anticipated release date of December 1, 2014, on Amazon would be an ideal gift for anyone who has ever suffered loss.