Looking for a three-hour plus educational adventure for your Girl Scout?  Look no further than a field trip to Cahokia Mounds, designated a World Heritage Site by the United Nations Educational, Scientific, and Cultural Organization. 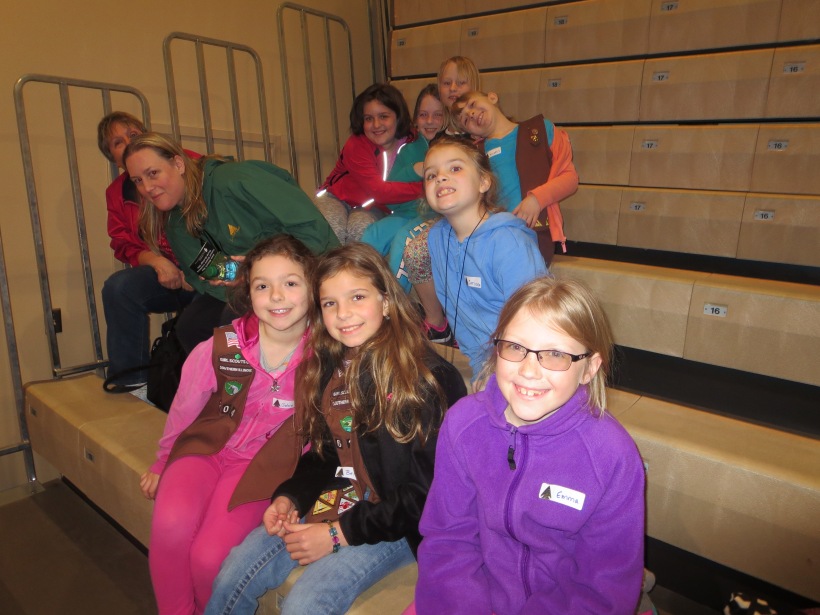 Beginning with an engaging performance by The Kahok Dancers, the Brownies not only watched The Pipe Dance and The Eagle Dance, they participated.  Quite the workout if I do say so myself . . .

From there, our group, Arrowhead, headed to our crafts/games session.  The girls began by rubbing copper-colored tin wrapped around tiles with Native American imagery.  The completed rubbing was then transformed into a necklace.  Once this was finished, girls then used their hands to form clay into a bowl similar to those seen in the museum.

The games portion consisted of learning how to throw spears using two different devices.  One of our Brownies, Miss G., found her calling as a future javelin thrower as she was able to throw further than any other adult or child in our group.

Next, girls watched the award-winning movie, Cahokia:  City of the Sun and then explored the museum. 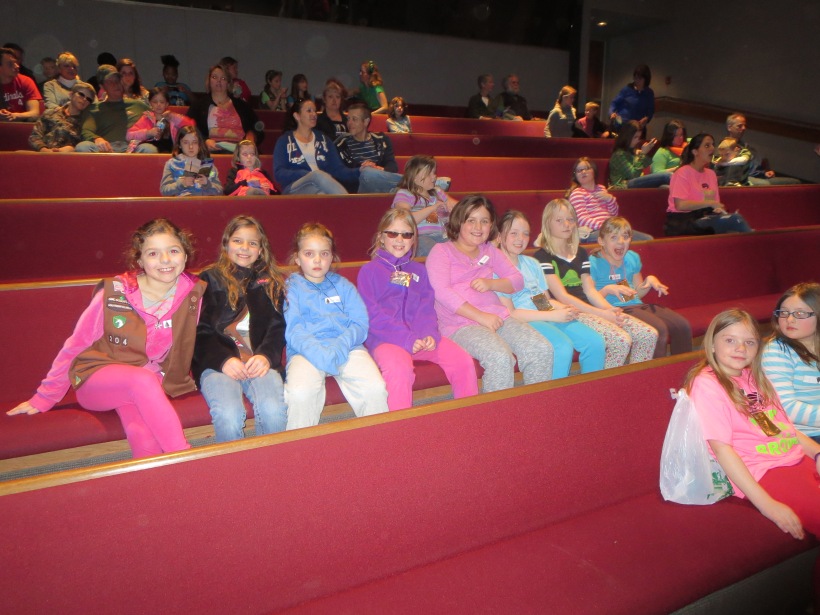 Storytelling with Marilyn Kinsella followed with her telling the legend of the origins of light and darkness.  Not a peep was heard until after she concluded her time with instructions on how to make a bracelet out of jute.

Our final session involved our returning to the auditorium where an archaeologist showed us various Native American tools, how they were crafted and where they were found.  Learning soil color and striations matter when excavating, the girls put this knowledge to the test with their snack.  Girls created their own “soil” layers with chocolate pudding, vanilla pudding, cookie crumbles, Gushers as “evidence,” chocolate sprinkles, and a gummy worm on top.

Given new energy, the girls then drove (me) or walked (others) across the street to Monks Mound and climbed the stairs, some more than once (not I).

This is most definitely a field trip worth taking, and one I think our Brownies will remember for a long time to come.

FREE.  As the end of summer fast approaches, we like to try and squeeze in summer activities we figured we would have already participated in by now.  Today was our day to explore Cahokia Mounds in Collinsville, IL. 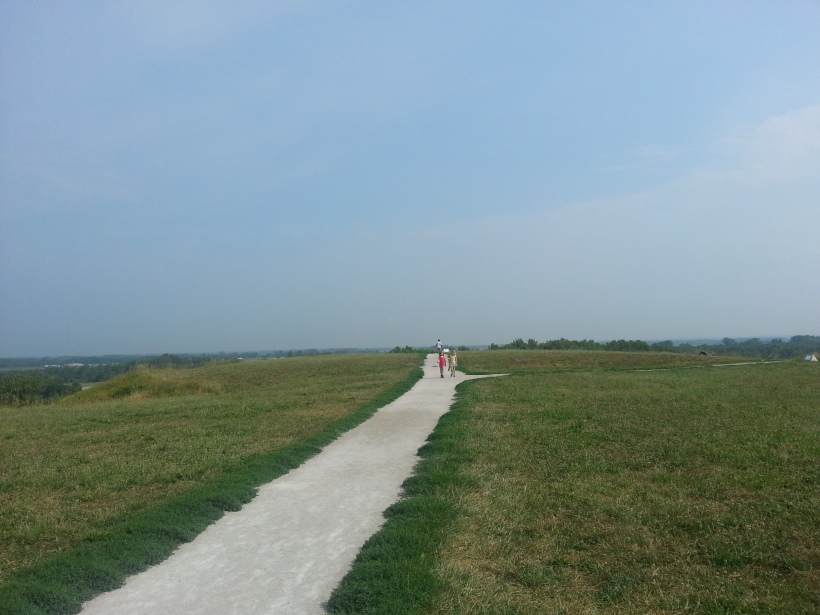 We (my six and eight-year-old squirts) began with the concrete stairs which lead to the top of Monks Mound, the largest Pre-Columbian earthwork in American north of Mexico.  With burning calves, I reached the top after my two boundless bundles of energy.   While they continued to explore the platform of the mound, I, with beads of sweat rolling down my back, rested on the bench strategically placed near the top of the stairs.  Although I had visions of multiple ups and downs, we all agreed one round on the stairs was enough for today, so we headed to the Interpretive Center across the street.

Since we visit this historic site at least once a year, the girls’ excitement increased as we walked closer to the heavy, ornate doors.  This time, though, the girls chose to investigate the exhibits before viewing the informative and award-winning fifteen-minute film, Cahokia:  City of the Sun.

Dioramas with plenty of buttons to push in order to light certain areas entertained and educated simultaneously.  In addition, an interactive table covered with Native American toys challenged their hand-eye coordination.  Not to forget, the drawers with pulls (a favorite of the girls) filled with artifacts allowed visitors to further expand their learning.  Finally, I believe we walked through the life-size village a minimum of five times (I sat out the sixth, seventh, and eighth times) which concludes with a replica of a Sweat Lodge. 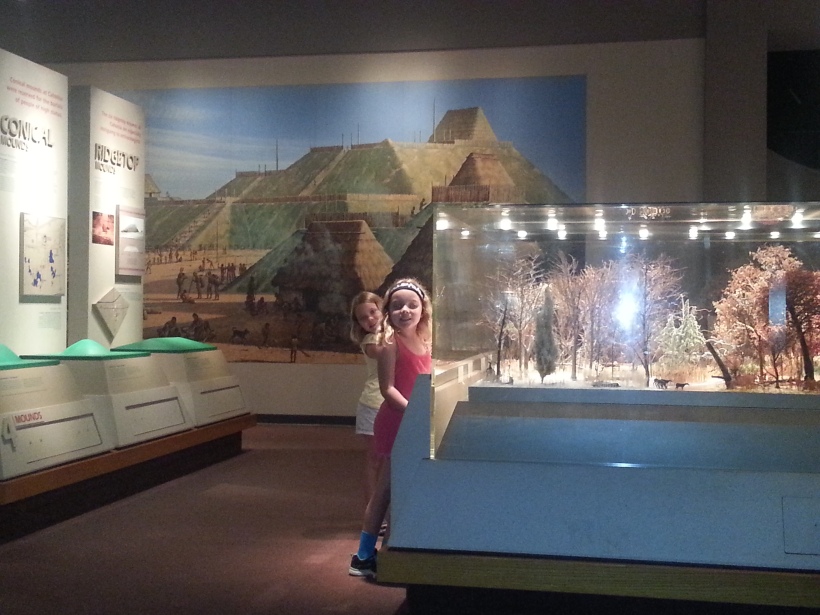 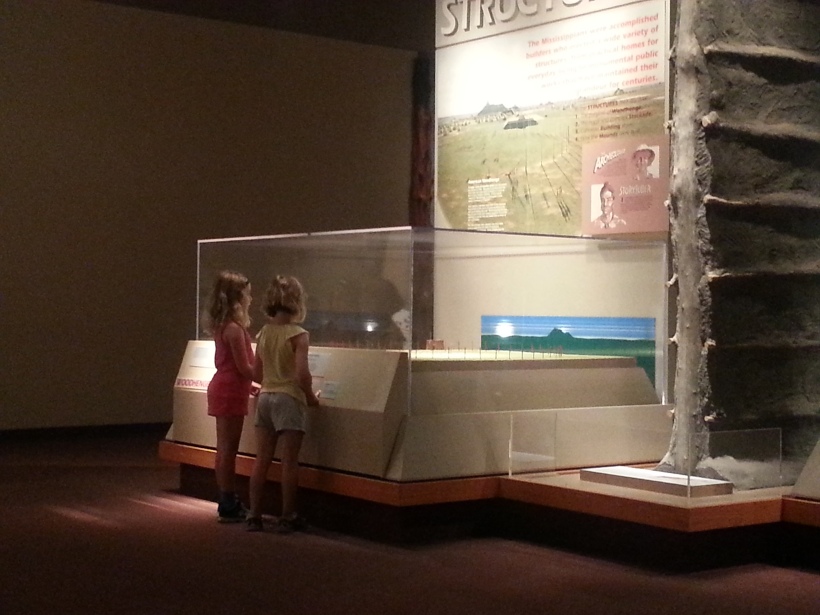 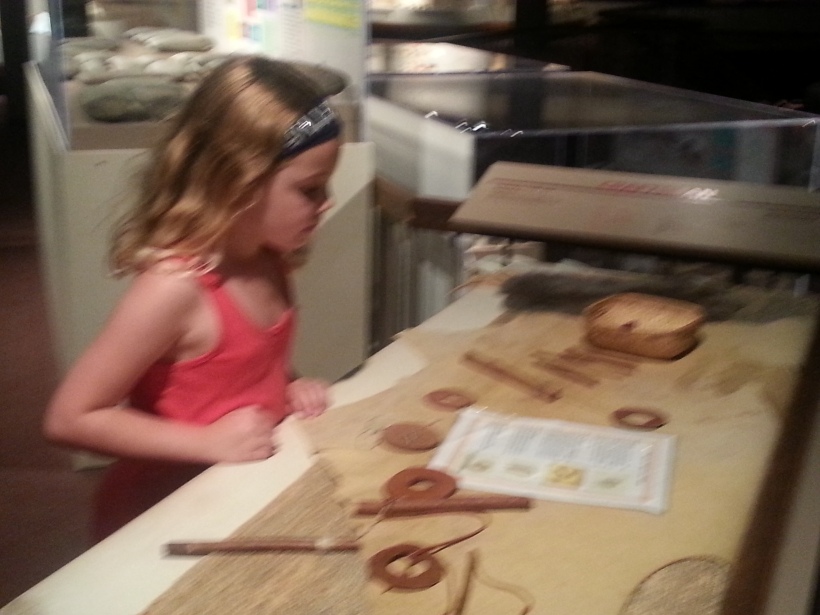 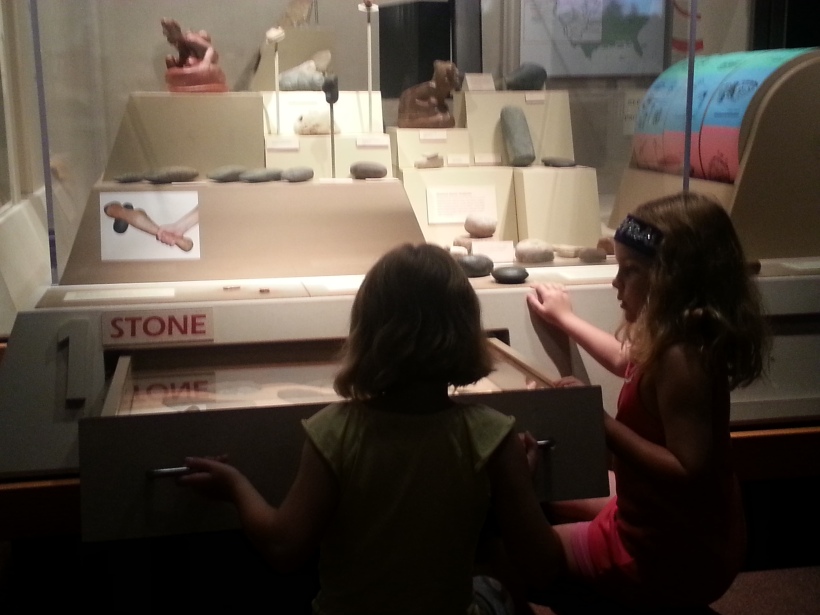 A further opportunity of a self-guided tour outside amongst the other mounds was available, but we opted out since Momma’s legs had turned to jelly due to our initial climb.  We will add this to the list for next time as well as a future exhibit coming April 2015. 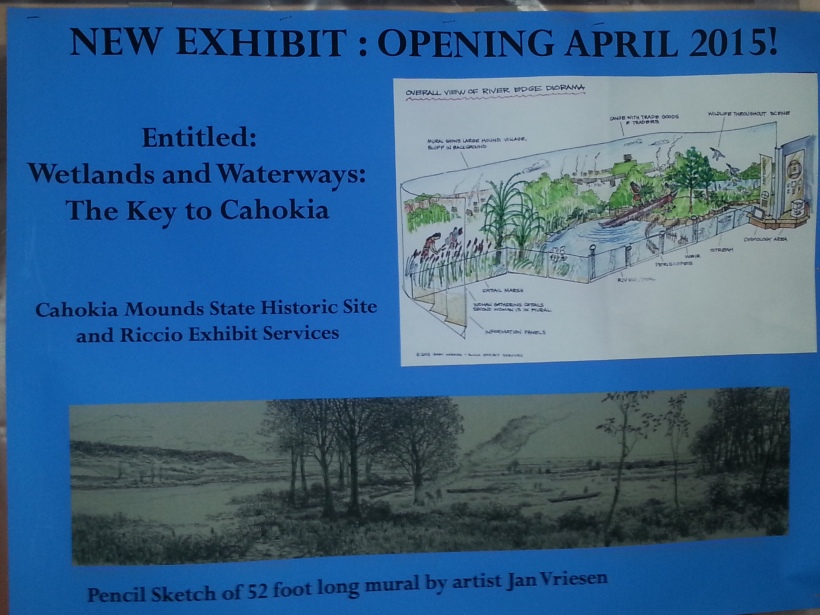