Why do you write?

I write to understand, process, share, and be heard.  Writing allows me to find my position on subjects, archive my memories, and most importantly, show others my love for them.

In writing about books, I hope to infect others with my passion for reading as Professor Manuela Mourao did for me over twenty years ago.

Faced with a cancer diagnosis in 2011, I was motivated more than ever to capture my thoughts and ideas on this blog for my girls as well as others to reaffirm we are not alone.  One day, perhaps, my daughters will read my writing and connect with their mom on another, more intimate level, or at the very least, know I was a writer who constantly worked on honing her craft.

Now, it is YOUR turn to answer this week’s Writing Workshop Wednesdays prompt. . .

Why do YOU write?

Exhale . . .  Yesterday I watched a friend’s kiddos while she had to work.  This summer she and I are swapping days with our kiddos who are identical in age so that each of us has time to exhale.

The kiddos and I visited one of our favorite parks and ended up staying for over two hours.  Children’s laughter . . . exhale.

They then fed “dead bread” (expired bread/cereal) to the ducks who happened to be M.I.A.  Exhale . . .

A short walk to the local library followed where the kiddos selected books and movies . . .  Their love of reading . . . exhale.

Share your idea of LOST in only five minutes . . .

A dear friend and Brownie mother, Sarah K., told me about a program offered at The Glen Carbon Centennial Library where children are given the opportunity to read aloud to therapy dogs, Socrates and Shoto.  Taking this idea and running with it, my co-leader Sarah B. and I offered it as a field trip option for both our Daisy and Brownie troops, 48 and 611 respectively.

Although occurring at 6 p.m. on a school night (my squirts who have a love of sleep like their momma are snoozing by 7:30 p.m. most nights), the response in numbers from both troops was ideal.

Magi Henderson, the Youth Services Director extraordinaire, had books set out from which the readers could choose or readers were allowed to roam the shelves and select a book (or books) of their own choosing. 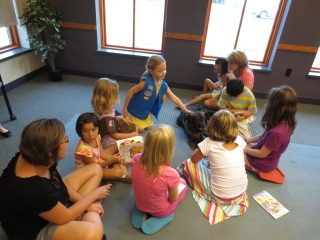 Due to the large number of participants, Shoto and Socrates were placed in separate areas so that the children could gravitate between the two.

At 6:30, Fun Patches were distributed and our circle hug was completed.  This allowed some Daisies and Brownies to stay until the departure of the dogs at 7 p.m. while others could peruse the library or be on their way.

If your squirt or your troop is interested in reading to Shoto and Socrates, check the calendar and register (cost is FREE)- next visit is October 14, 2013.

Ever wanted to promote the love of reading within your own family and needed a book with the ability to garner the interest of three generations?  Carol Galusha’s The Same Birthday is the novel that meets this criteria.
An educator for more than twenty years, Ms. Galusha implements components that draw the young adult reader into the novel such as active-voice sentences which are direct, yet chock-full of details, brief chapters overflowing with discussion material, and themes in which a young adult can relate.  Students will be pleased with the 120 pages when the novel is distributed in class, yet mesmerised by the journey in which the three protagonists take them.
Interestingly enough, this journey is full of complexities which engage the adult reader also.  Thus, not only an ideal choice for the secondary classroom complete with lesson plans provided by the author, but also a work with the ability to bring multi-generational readers together.  Yes, Grandma, Mom, and Daughter, for example.
In the case of book club, what brings people together better than food?  In this case, the food acts as a symbol for the lives of each of the three main characters.  To represent Janine, appetizers should be available such as those mentioned on page 23 in The Same Birthday:  pigs in a blanket, vegetables, and chips with elaborate dips.  In the case of Mary Anne, earthy potato soup and rustic ham sandwiches express her backstory.  Without a doubt, the essentials for making a mouthwatering pizza pie will not only coax the adolescent reader to book club, but also create a starting point for discussing the life of Molly.  Looking for the ideal gift for the tween, adult, and seasoned person in your life?  Look no further  . . . you cannot go wrong with the gift of reading.

This novel is about the coming of age of a brother, Ralph, and his sister Molly. Even though Molly is a bright, young female who aspires to be a writer, she considers herself a mind housed within a long wooden box.  While Molly and Ralph visit their Uncle Claude and grandfather, their mother takes their two older sisters around the world in preparation for marriage. Molly, not faced with many alternatives, spends the summer imitating Ralph. When Ralph asks her what dirty words she knows, his name, too, is added to her list of “unforgivables.” Molly’s presence, in essence, inhibits Ralph’s male maturation. Therefore, the hunt for the mountain lion translates into a form of salvation for future Mollys as well as for Ralph. This novel, rich with symbolism, is an appropriate novel for the secondary classroom highlighting such subjects as feminism, anorexia, and dysfunction in the family.

Your favorite children’s book, and why . . .
The Giving Tree by Shel Silverstein. Such pathos, such empathy in just a few words and some simple line drawings.

A cause that’s closest to your heart, and why . . . Bullying. While kids grow, their sense of self is so vulnerable. When they’re targeted by others (at school or at home) the way they think about themselves is altered in unhealthy ways. They can start to assume there’s something “wrong” with them that makes them “deserving of disrespect.” That will undoubtedly erode their self-confidence and hold them back in life. Kids whose aggression is tolerated are also being changed. They assume that threats, manipulation and violence are acceptable ways to behave. That can set them on a path of regrettable choices. And there’s a third group… the largest one playing a part in the dramas that take place daily in schools around the world: the silent bystanders. The Culture of Cruelty changes them as well and they begin believing that they’re powerless in the face of injustice.  That’s no way to help develop a new generation of leaders.

If you could be a character in any novel, who would you be?

Mary Lennox in The Secret Garden. She brought herself and others out of darkness into the full bloom.

A quote that motivates you . . . “If you’re not modeling what you teach, you’re teaching something else.” (I don’t know who said it first)

The title of the one song you could take with you to that deserted island . . .

To work together to make our own corner of the planet a safer, saner, cleaner, greener more equitable place for everyone.

Favorite game you played as a child . . .  Pretending that my bicycle was a horse and riding really fast

A film that brings tears to your eyes: The Blind Side.

Describe your first kiss: I don’t remember my first kiss, but fortunately I can recall the last one in complete sensory detail – sweet and romantic.

A cause that’s closest to your heart, and why: Children’s literacy is of huge importance to me. I love to read, write, create and educate myself. I believe many of the world’s ills could be solved by such education, particularly encouraging parents to read to their kids. And the thought of libraries closing due to lack of funding absolutely appals me.

If you could be a character in any novel, who would you be? I would be Anne in Anne of Green Gables.

Explain the worst job that you’ve held. My worst job was being Latrine Officer in a children’s camp. When one of the kids dropped her gold watch into the pit, it was my job to fetch it back for her. I came to fully understand the meaning of trust as I was lowered by my ankles.

A quote that motivates you:“It is better to create than to be learned, creating is the true essence of life.”  (Barthold Georg Niebuhr)

The title of the one song you could take with you to that deserted island: “Oh I do like to be beside the seaside” – in the hope that such a positive affirmation will help me withstand the solitude!

Three Wishes
1. For me: I wish, oh how I wish, that I could draw.
2. For my family and friends: health and happiness.
3. For the world: an end to greed.

Favorite game you played as a child: Imaginative games – roleplaying Robin Hood and building cubbies in the bush so we could spy on the Sheriff.

May 7, 2011 authorgroupie3 Comments
A film that brings tears to your eyes . . .
The God’s Must Be Crazy for sure. The final scene with the girl, the table and the continually toppling red and white Tupperware had tears rolling from my eyes. They still get damp at the mere thought of the movie.
Describe your first kiss.
Inaccurately aimed at first, then sort of somewhat damp.
Your favorite children’s book, and why . . .
Noddy by Enid Blyton, because it was banned. It probably did unimaginable harm to me in my formative years.
A cause that’s closest to your heart, and why . . .
Difficult question for a heartless soul like me. But probably oil. I hate it because it doesn’t just run cars, it starts wars. I’d prefer cars to run on milk or grass clippings.
If you could be a character in any novel, who would you be?
Zaphod Beeblebrox without a doubt. Anyone who signs the destruction order for Earth because he thinks someone just wants his autograph is someone who really has celebrity coolness. His extra head also offers a lot of advantages on lonely evenings alone.
Explain the worst job that you’ve held.
Easy. Author. All the rest paid a salary and I didn’t get criticised daily.
A quote that motivates you . . .
When one door closes, there always seems to be another ready to slam in your face.
The title of the one song you could take with you to that deserted island . . .
“Honky Tonk Woman” by The Rolling Stones.
Three Wishes
1.  A red Ferrari.
2. World peace.
3. Three more wishes.
Favorite game you played as a child . . .
Mouse Trap without a doubt. The greatest board game ever invented. I really should buy it again!
Derek Haines
May 6, 2011 authorgroupie1 Comment
May 6, 2011 authorgroupie1 Comment