My oldest daughter loves to read, but it can be difficult transitioning from picture books to chapter books.  As a second-grader, she has taken the leap, but misses the beautifully illustrated pictures.  So, when my own (highly talented) recommender of books, Sarah B. told me her daughter Miss Ava stays up until 11 p.m. at night sneaking reads under the covers due to the series, Origami Yoda,  I was more than sold.  Since her daughter had completed the series, we were allowed to borrow Fortune Wookie for a trial run.  Not only do the drawings in the margins ease the transition from picture books, but the origami “how to” directions for the various characters beyond a doubt “sealed the deal” for my lover of crafts daughter.

Sarah B. then discovered a workshop offered at the Edwardsville Public Library which covered the Origami Yoda series.  Yeah, Baby!  Sarah B. convinced the librarian to register our second-grade girls as the program was intended for third-fifth graders only.  I then forwarded the message to my Book Club Babes (Second Grade Book Club Members) and had one taker, Miss Emma.  Excitement ensued as well as more deliberate reading as the day of the workshop approached.  Yes!  A literacy advocate’s dream . . .

Arriving at the library early, we waited patiently for the doors to the workshop room to open with Miss Ava’s little brother Mr. Jakey.  Upon opening of the doors, not one of the three girls bothered to look back.  So, I settled in a corner chair and read while intermittently peeking in through the window at their progress.

After a while small groups exited the room at staggered starts pursuing their mission of a scavenger hunt.  Fortunate enough to view this from my chair in the corner, I could witness their excitement and collaborative learning firsthand.

After an hour of focused learning disguised as fun, they all pleaded starvation.  So, we took the short walk from the Edwardsville Public Library to Dewey’s Pizzeria.  Hastily ordering, they wanted to watch the pizza makers behind the window.  Thus, I had a leisurely dinner by myself as they took quick bites and then returned to the viewing window where they snapped some photos with my phone. 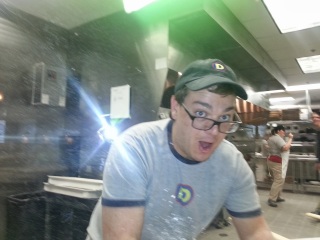 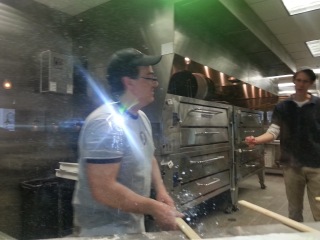 Utterly  thrilled by the sneak peek reading at the library of chapter one of Princess Labelmaker, we skipped dessert in search of the newly released book of the Origami Yoda series at Books-A-Million.  An added bonus came as we were loading ourselves into the car.  Parked next to us was a woman reading, so I was able to snap her picture for my book blog.  Score!

These second-graders’ love of reading is certainly contagious, “Truly wonderful, the mind of a child is” (Yoda, Attack of the Clones), so I am definitely looking forward to our next Book Club Babes outing.

My favorite book series is by Tom Angleberger. It is called The Origami Yoda Files. The books in the series are Origami Yoda, Art2 D2, Darth Paper, Fortune Wookie and Jabba the Puppet. There is a new book coming out on March 4th called Princess Labelmaker to the Rescue!.

The first book I read was Origami Yoda, and I loved it. The book is very funny. It is about a paper Yoda puppet that gets thrown away and magically comes back. The best part of the book was the part where Origami Yoda did a Jedi mind trick and kept everyone from spelling ‘mulct’. The worst part was when Dwight threw away Origami Yoda because he was being teased. I recommend this book to people who like Star Wars.

Darth Paper is about a boy who was teasing Dwight from Origami Yoda. He made a Darth Paper. The puppets have a light saber battle and Darth Paper was defeated. I liked this book too.

Art2-D2’s Guide to Folding and Doodling is about how to draw the characters from the books. You can draw them and fold puppets of them. I have made Origami Yoda, Fortune Wookie, and Ewoks. It also shows you how to make 3D letters and numbers, and I have done that too. This is a fun book, but it is not as long as the others and there is no story to it.

I am looking forward to reading Princess Labelmaker when it comes out. There is a party at the library for fans of the series, but it is for 3rd through 5th graders and I am too young.