Forget.  This past week I filled in for the hub as an assistant to one amazeballs coach of my daughter’s basketball team.  The players were engaged and genuinely having the time of their lives.  One player begged for even more Ups and Downs (running of the stairs) after they had already completed Killers (line runs).  His enthusiasm was contagious, and I couldn’t help but join him in the running of the stairs.

At the end of practice, the team scrimmaged.  Short a few players, Coach Sarah put me in, and I was pumped.  Running from one end of the court to the other seemed anything but work.  I wasn’t worried about counting my steps or wondering the number of calories I was burning;  I was plain and simple having fun.  With the busyness of life and adulthood, it’s easy to forget the joys of play.  Because of that one practice, I am planning a women’s basketball pick-up game in an effort not to ever forget again.  Thank you, Coach Sarah.

Dwell.  When I think of the word dwell, what immediately comes to mind is Dwell Magazine, an American magazine which explores the interiors and exteriors of modern design.  The glossy pictures within this magazine show clean lines and a place for everything, and while reading, I think how soothing it must be living in such an existence.

Then, I peer over the pages of the magazine and see a game of Monopoly in mid-play strewn all over the game table in our family room.  I see a shredded bra and socks lying on the floor which our adorable Labrador Retriever fetched from the dirty clothes.  I see dining room chairs splattered with grape juice stains, children’s artwork strung across the fireplace, and deep scratches in the hardwood where the girls rode their Plasma Cars in circles time and time again.

I think to my myself;  I wouldn’t want it any other way.  Dwell.

A favorite Bible verse of a dear friend and the current Beth Moore Bible study at our church, I believe 1 Thessalonians 5:11 defines Family in a nutshell.  These people whom encourage and build others up are the people I call Family in my own life.

Door.  I travelled to see a loved one this week who has been diagnosed with dementia.  She and a male friend had her door barricaded shut with a chair.  After a second knock, the man removed the chair which was wedged under the door knob and opened the door.

With this disease, I am never certain what I will encounter before I pass through her door. . .

During my visit, she showed me pictures of a man to whom she was once married.  She told me, “He was so nice to me.”  Having lived with this man she was referring to for several years while growing up, I know, for a fact, he was often not nice to her, his wife, as he had extreme sexist beliefs which manifested into condescending remarks and infidelity.

I had always joked with this woman after this marriage had ended that she had now transformed into a man hater of sorts since she often exclaimed, “I don’t need any man!”

This week I witnessed that her door on those negative memories with him had now closed, or, at the very least, for the time we sat together on her bed and sorted through pictures.

In my forty-three years, God has presented me with a plethora of doors to open and walk through with my entire being.  Some I have entered with no thought to the consequences, some I have attempted to hold shut, and some doors I have clawed at wishing they would open just one more time . . . one more time.  Door.

Tomorrow.  When I think of the word tomorrow, I can’t help but think of the song from the musical Annie whose title happens to be Tomorrow with the lyrics, “The sun will come out tomorrow . . .”

Sometimes when I am right in the midst of disheartening news where the core of my belly hurts from such sorrow, I can’t imagine there being a sunnier tomorrow . . . not ever.

Yet, miraculously laughter comes, and joy fills the void.

The cycles of life are inevitable and come with each tomorrow (my brain knows this), yet watching the spark dim from a loved one’s life can seem far too much to bear (my heart feels this).

Gratefully, though, a woman blessing of great faith sent me this quote:

God wouldn’t have allowed it unless He had a purpose.  Don’t just go through it- grow through it.

I have read the above several times over, and I intend to keep these words close to me today as well as every tomorrow.

Good.  What an appropriate term chosen on this day being Good Friday.  Yes, I think Kate Motaung knows what she’s doing.

Thinking about Good Friday itself, this is the day Jesus Christ gave His life for all of us.  God surrendered His son so that we may all have life after death, a heavy concept to wrap one’s head around, without a doubt.

In some countries, this day is a public holiday with schools and businesses closed.  A few states in this country observe Good Friday as a state holiday.

Good Friday often marks the beginning of a school’s spring break or acts as its conclusion.

What I do know is that God’s requiring us to do good unto others, being kind to one another, seems like a small request considering all which has been sacrificed for us.  Good.

Real.  My oldest squirt has been sick the last couple of days with a fever and diarrhea.  Running to the bathroom,  my squirt squirted a bit on the bathroom floor.  Now, this is real.

Due to years of baking in the sun without the use of sunscreen, I now have funky bumps growing on my face which I periodically have to have burned off to prevent skin cancer.  The process is painful, feeling as if someone is sticking tiny needles into my skin.  The sick squirt mentioned above accompanied me today to one of these appointments since she was home from school.  On the way home as my bumps formed white growths which will eventually form scabs, my daughter commented, “I’ve never noticed those bumps on your face before.  I just thought your face was greasy like you’d rubbed Culvers buns on them.”  I, in turn, had to wipe tears from my eyes at this because I was laughing so hard and so proud of her descriptive abilities.

While waiting in the doctor’s office to be called back into the little room, my daughter and I listened as an elderly couple read aloud from People Magazine and then commented on the stories.  Hearing about a celebrity’s impending divorce and how much someone had paid for a house, my squirt and I held back giggles as the couple must have come across an article or recipe about smashed potatoes.  The man and woman then entered a rather heated debate over the differences between smashed and mashed potatoes.  We failed to discover what their final verdict was as my name was called by the nurse.  What I do know is that sunscreen is a must, and I love me some real.

Gather.  I had lunch today with a salt-of-the-earth, wise-beyond-her-years woman blessing today.  Whenever I am with her, we are able to talk about issues and share ideas with one another.

In essence, when we gather, I benefit from FREE counseling, FREE motivational sessions, FREE theological lessons, and FREE love, no conditions whatsoever, to name just a few of the FREEBIES. 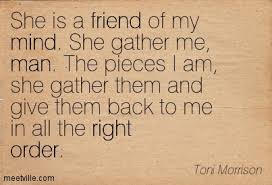 Visit.  When I think of the word visit, I think of my friend of 12+ years, Lisa.  I met her through the hub, as her hub and my hub used to attend graduate school together.

Our first meeting was at a Chinese buffet in Champaign, IL.  She had recently given birth to their first baby girl, Miss Olivia.  What I remember about that first meeting is Lisa’s beautiful red hair and how calm and collected she was handling a newborn while eating her dinner.

Over the years, she, her hub, and their now three children have visited my family often, and our friendship has flourished.  Besides tasting levee-high pies together and attending a local “luau” (in Illinois) together, we have shared our hearts with one another.  During several visits, she generously answered my many questions about her faith and theology in general.  This is a woman of great belief as I have learned over the years.  Repeatedly, she turns to the Lord in times of sorrow, worry, and thankfulness, truly unwavering in her connection with her God.

Recently Lisa sent me a picture of a cake creation she made for a friend.  A stay-at-home mother who homeschools her children, Lisa’s talents always leave me with a sense of awe and renewed motivation;  I can never wrap my head around how she does all she does.

Despite her multifaceted expertise, Lisa’s response to my “oohs” and “aahs” over her latest creation was, “All from God.”  Visit.

Open.  This past Friday I scurried to the store in order to gather groceries before the impending freezing rain.  The temperature outside seemed to chill me to the bone.  A breast cancer warrior, my thoughts were, “If I had real nipples, they would be piercing through my winter coat at this time.”  Then I thought I need to text that to my BFF/partner in crime/cheerleader/sounding board/lifeline.  Yes, immature beyond a shadow of a doubt, but this is how we roll.

Fast forward to my return home and my retrieval of the mail.  As I lowered the plastic black door, I spied a rectangular piece of correspondence addressed to none other than “Tits McGee,” and I could not help but smile one of those smiles that borders on painful due to its width.  This, I knew, had to be a “small package” (what I consider snail mail) from the same woman who said without hesitation, “Cansah Schmansah,” when I told her of my diagnosis.

The real joy came in the form of tears as I opened this card, for inside was the inscription, You’re the sister I always wanted.  Open.