Ninety-one years young is the age my hub’s grandpa is turning today, and I am so grateful to have him in my life.  I first met him twelve years ago at my then boyfriend’s (now hub) doctoral defense.  I had not met any family members to this point, and this is the day I met not only his parents and brother, but also his grandparents.  I was definitely sweating bullets.

A couple of weeks later, the then boyfriend (now hub) and I drove to his grandparents’ house for the day.  They live on some land complete with two fishing ponds, horses, dogs, and at the time, two llamas.  After lunch, Grandpa decided to take us out on his boat so that we could water-ski (my first and only time to date). 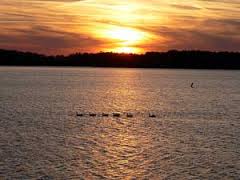 The then boyfriend (now hub) used his slalom ski and danced on the water with ease before it was my turn.  Talk about pressure.  With patience, Grandpa navigated the water with my repeated attempts until I finally was able to stand on my skis for close to thirty seconds, and it was glorious.  Yet, riding the inner tube connected to the back of the boat proved to be more my speed.

Enjoying our time on the water, we all initially missed the acrid stench coming from the engine which eventually turned into billowing smoke.  Stranded on the lake without a working engine, Grandpa reached for his oar and began paddling.  Shocked, to say the least, to witness such a feat from a grandpa, I remember nudging the then boyfriend (now hub) and whispering, “Don’t you think you should do the paddling?”  After all the then boyfriend (now hub) did competitively lift weights.  The then boyfriend (now hub) responded, “No, he likes to do this.”  Shaking my head in disbelief, Grandpa continued to paddle with barely a hint of perspiration on his forehead.

Twelve years later, I now thoroughly understand what a pillar of a human being this man is, possessing strength not only in his physicality, but also his character.  So, without a doubt I am thankful for Gpa O. and wish him the best of birthdays on this day.

For what are you thankful?

2 thoughts on “Sunday Thanks: Gpa O.”